The clocks going forward marked the point where we could finally bid the crappy winter farewell. I do love winter, but wet and windy isn’t so inspiring. Epic snowfall on the summits at odds with the complete lack thereof elsewhere. I had managed a day up in snowy Braemar with the Mukluk to try it out in it’s native habitat (twas excellent). But it didn’t last long. In the few short months since that purchase – things moved on yet again on the bike front. An opportunity arose to pick up a used Jones diamond frameset at a bargain price. Coupled with the fact I now had a fat front wheel, with hub suitable for the Jones boring/unicrown fork, made for a relatively inexpensive entry into the world of Jeff Jones. No melty looking titanium though.

That brings the current bike count to three and a half, which is quite sensible, I keep telling myself. My Cotic is currently in bits, under our bed. I could use the money, but can’t bear to part with it. I’ve not owned many bikes, but I have some pretty nice, well regarded ones. But the Jones is something else… in the short time I’ve owned it, it’s clear to me that the hype is justified, even for this ‘boring’ version. The bike is very capable, brilliantly conceived, agile, comfortable, quick, assured and a lovely red colour. People look at it funny. But honestly, if I had to own only one bike… (multiple wheel sets are allowed, right?) Any bike that has me out the saddle, pushing big gears after my second 35 mile day, must be doing something right.

I’d slowly been purchasing various bits of bike luggage from Alpkit to make loading up the bike a bit easier, a new feedbag for quick calories and a ‘gas tank’ for the phone, lip balm, suncream, chamois cream and hydration tablets. Stuff that’s good to keep handy, as having it buried somewhere will end up with you paying the price later. Margaret’s zero megapixel compact fits nicely too, I miss RAW though.

I’d gone to the trouble of helitaping the frame to try and keep the paintwork in tiptop shape, but one ride done, the tape is looking tatty already. I think in future I’ll just duct tape the wear points and remove it again after trips. The fat front was great on all but grassy bits (draggy) and was even okay on tarmac once I’d upped the pressure. Admittedly, I did get to thinking about a Knard rather than Nate for such trips.

Enough about the bike. I set out from Blair Atholl with the plan being: Tilt – Geldie – Feshie – Camp – Drumguish – Tromie – NCN 7 – End. I’d been picking Gari’s brain over at Racks On, Racks Off about going CW or CCW, I think CCW was a good choice. I got up and along good tracks into Tilt, good progress and the onto the singletrack after the Falls of Tarf. A couple of sketchy bits with a loaded bike and clipped in, with a drop away to the river below. I’d already passed a couple of curious walkers asking about the bike and then, I think, a couple on a pair of Surly ECRs, which didn’t quite register until I’d past them.

I was still happy rolling along past Bynack Lodge, having forded the river a couple of times, unaware of what lay ahead at Geldie. Riding along the estate track, I pass more walkers transfixed by my massive tyre, they speak directly to it.

Onward, things become more Geldie. Looking back at the map, I see it’s only about 6km or so. It felt longer. I’d heard it could be wet, but in truth it wasn’t too bad. On foot it’d be tolerable, but it’s no place for a bike. It’s a necessary evil in order to make this loop possible. I swore at it, at the tantalising glimpses of gritty singletrack, which crested little hillocks before revealing itself to be little more than twenty feet in length, leading directly into an unridable gully. Dismount, push up and out. Repeat. That’s Geldie folks. The falls at Eidart just about put a smile on my face. My emergence into Glen Feshie certainly did. A short, steep doubletrack climb, followed by heathery singletrack contouring around the upper glen. Past the landslips, and back onto landy track with wooded crags above. Find a flat spot and pitch up.

I had a fine dinner. My signature dish ‘Amalgamated Slop’; Supernoodles, cup soup, oatcakes, Look What We Found Curry. Chuck it all in the same pot and enjoy the monofood goodness. My MYOG Caldera Clone is due for replacement, I’ve had several years out of it, so it owes me nothing. Up here in the glen, things have turned chilly. I could see the last light on the distant hills. It was still relatively light, but I was ready for my sleeping bag. I finish my book before nodding off. 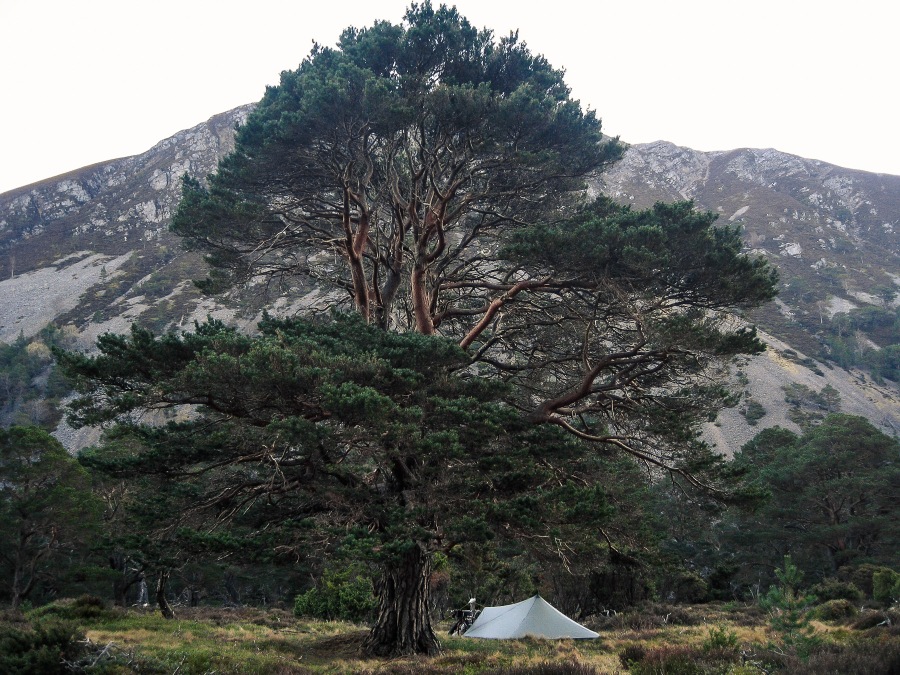 I never sleep especially well when camping, but this was not too bad. I wake a couple of times, but it was a calm cool night, so no flapping in the wind to annoy me. I get up to pee and make breakfast. I see the rising sun kiss the top of the crags. As I pack up, it slowly crawls across the face of Creag na Caillich, eventually reaching the floor of the glen and the river. Another blue sky day.

I clip in and ride up to the final landslip, then down around the Feshie dogleg and out past the bothy, I wave and smile to the folk milling around outside. I never smile this early in the morning. My legs are feeling good and the new path along Feshie makes for swift progress, through the wood and then out into the new growth, along the new path through the heather to Strontroper. Over the river to meet asphalt, hang a left to Baileguish, from there to Drumguish, down Glen Tromie on lumpy estate roads, passing questionable architecture on the way. Is that a care home? A prison? 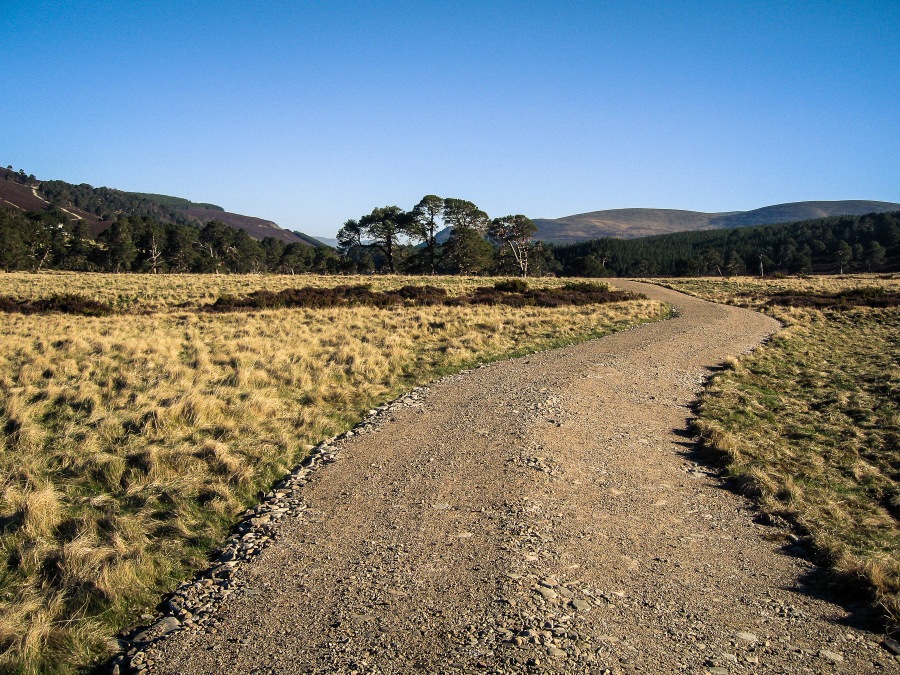 My right knee starts acting up. ‘You’re supposed to be the good knee’. It dawned on me that my saddle must be too low after adjusting it to facilitate pitching the TrailStar. Raise it up, pop some ibuprofen just in case and kept my cadence up. From Bhran Cottage, I eyeball the distant track climbing alongside Loch an t-Seilich. The wind has picked up, making progress a little slower then usual. The climb up to Gaick Lodge came and went, it looks worse from distance. 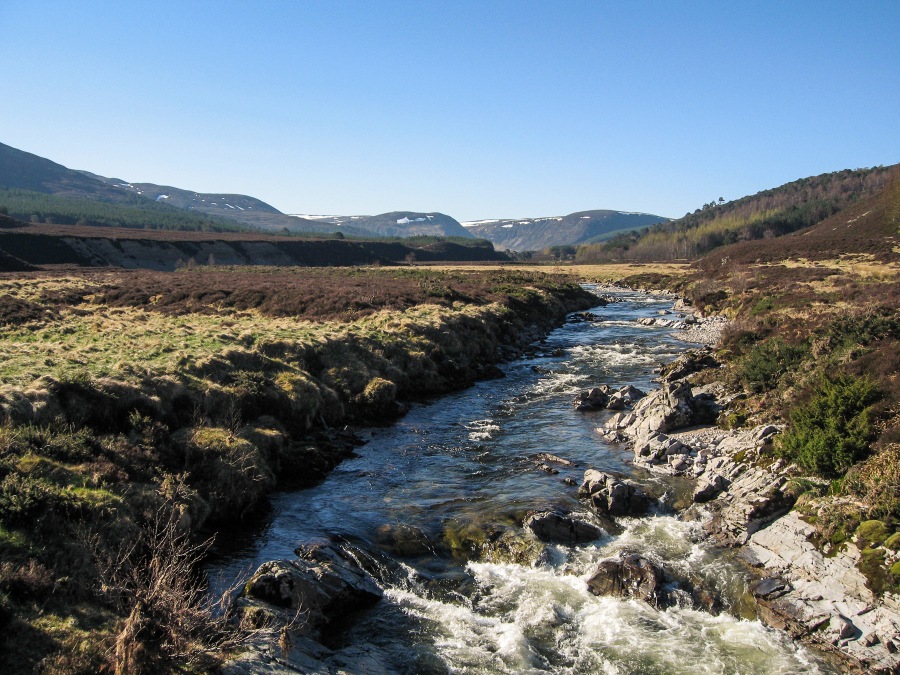 A couple of bikers come the other way, they find me mid tyre pressure adjustment. My last adjustment had missed the sweet spot and handling had gone a bit mushy. We talk bikes. They warn of flying insects by the loch ahead. The trail is due to turn more technical, more narrow singletrack with a drop away to the left. I put faith in the front tyre and the big chainring. More bikers coming the other way, pushing a tricky bit. I’m in the zone, my tongue may be sticking out in concentration, I have a fully loaded bike and dodgy front brake and I’m clipped in. One asks a question as I pass, ‘thank you’ I say, fixated on the trail ahead. I hope they’ll forgive me, this momentum was hard earned.

I reach the end of the loch a pick up the old estate road. A spot of lunch and a short rest. Legs feel good, knee feels good. I crack on, progress must be made. I hear the A9 before I see it, a short pull up and a fun, final descent to the roadside, across to the old A9, now NCN 7, and spin my way back to Blair Atholl. I ride no handed to stretch my back, neck and shoulders, but in truth I feel pretty good – most unusual for me after so long in the saddle. This bike looks after you. I return the favour by oiling the chain.

Sorry, the comment form is closed at this time.